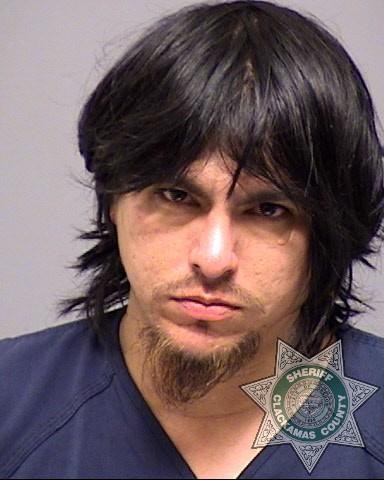 The male arrested was listed as having a date of birth of 12/10/90 and was arrested for suspicion of the below crimes:

Reckless burning.
(1) A person commits the crime of reckless burning if the person recklessly damages property of another by fire or explosion.(2) Reckless burning is a Class A misdemeanor. [1971 c.743 §142]
Disorderly conduct in the second degree.
(1) A person commits the crime of disorderly conduct in the second degree if, with intent to cause public inconvenience, annoyance or alarm, or recklessly creating a risk thereof, the person:(a) Engages in fighting or in violent, tumultuous or threatening behavior;
(b) Makes unreasonable noise;
(c) Disturbs any lawful assembly of persons without lawful authority;
(d) Obstructs vehicular or pedestrian traffic on a public way;
(e) Initiates or circulates a report, knowing it to be false, concerning an alleged or impending fire, explosion, crime, catastrophe or other emergency; or
(f) Creates a hazardous or physically offensive condition by any act which the person is not licensed or privileged to do.
(2)(a) Disorderly conduct in the second degree is a Class B misdemeanor.
(b) Notwithstanding paragraph (a) of this subsection, disorderly conduct in the second degree is a Class A misdemeanor if the crime is committed within 200 feet of the real property on which the person knows a funeral service is being conducted.
(3) As used in this section, funeral service means a burial or other memorial service for a deceased person. [1971 c.743 §220; 1983 c.546 §5; 2001 c.104 §55; 2005 c.631 §1; 2012 c.35 §1]