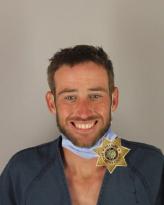 The 32 year old male was arrested for suspicion of the below crimes:

Unlawful use of weapon.
(1) A person commits the crime of unlawful use of a weapon if the person:(a) Attempts to use unlawfully against another, or carries or possesses with intent to use unlawfully against another, any dangerous or deadly weapon as defined in ORS 161.015; or
(b) Intentionally discharges a firearm, blowgun, bow and arrow, crossbow or explosive device within the city limits of any city or within residential areas within urban growth boundaries at or in the direction of any person, building, structure or vehicle within the range of the weapon without having legal authority for such discharge.
(2) This section does not apply to:
(a) Police officers or military personnel in the lawful performance of their official duties;
(b) Persons lawfully defending life or property as provided in ORS 161.219;
(c) Persons discharging firearms, blowguns, bows and arrows, crossbows or explosive devices upon public or private shooting ranges, shooting galleries or other areas designated and built for the purpose of target shooting;
(d) Persons lawfully engaged in hunting in compliance with rules and regulations adopted by the State Department of Fish and Wildlife; or
(e) An employee of the United States Department of Agriculture, acting within the scope of employment, discharging a firearm in the course of the lawful taking of wildlife.
(3) Unlawful use of a weapon is a Class C felony. [Amended by 1975 c.700 §1; 1985 c.543 §1; 1991 c.797 §1; 2009 c.556 §5]
Coercion.
(1) A person commits the crime of coercion when the person compels or induces another person to engage in conduct from which the other person has a legal right to abstain, or to abstain from engaging in conduct in which the other person has a legal right to engage, by means of instilling in the other person a fear that, if the other person refrains from the conduct compelled or induced or engages in conduct contrary to the compulsion or inducement, the actor or another will:(a) Unlawfully cause physical injury to some person;
(b) Unlawfully cause physical injury to some animal;
(c) Unlawfully cause damage to property;
(d) Engage in conduct constituting a crime;
(e) Falsely accuse some person of a crime or cause criminal charges to be instituted against the person;
(f) Cause or continue a strike, boycott or other collective action injurious to some person’s business, except that such a threat is not deemed coercive when the act or omission compelled is for the benefit of the group in whose interest the actor purports to act;
(g) Testify falsely or provide false information or withhold testimony or information with respect to another’s legal claim or defense; or
(h) Unlawfully use or abuse the person’s position as a public servant by performing some act within or related to official duties, or by failing or refusing to perform an official duty, in such manner as to affect some person adversely.
(2) Coercion is a Class C felony. [1971 c.743 §102; 1983 c.546 §4; 1985 c.338 §1; 2007 c.71 §45; 2015 c.751 §1]
Menacing.
(1) A person commits the crime of menacing if by word or conduct the person intentionally attempts to place another person in fear of imminent serious physical injury.(2) Menacing is a Class A misdemeanor. [1971 c.743 §95]
Disorderly conduct in the second degree.
(1) A person commits the crime of disorderly conduct in the second degree if, with intent to cause public inconvenience, annoyance or alarm, or recklessly creating a risk thereof, the person:(a) Engages in fighting or in violent, tumultuous or threatening behavior;
(b) Makes unreasonable noise;
(c) Disturbs any lawful assembly of persons without lawful authority;
(d) Obstructs vehicular or pedestrian traffic on a public way;
(e) Initiates or circulates a report, knowing it to be false, concerning an alleged or impending fire, explosion, crime, catastrophe or other emergency; or
(f) Creates a hazardous or physically offensive condition by any act which the person is not licensed or privileged to do.
(2)(a) Disorderly conduct in the second degree is a Class B misdemeanor.
(b) Notwithstanding paragraph (a) of this subsection, disorderly conduct in the second degree is a Class A misdemeanor if the crime is committed within 200 feet of the real property on which the person knows a funeral service is being conducted.
(3) As used in this section, funeral service means a burial or other memorial service for a deceased person. [1971 c.743 §220; 1983 c.546 §5; 2001 c.104 §55; 2005 c.631 §1; 2012 c.35 §1]