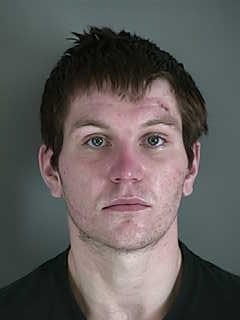 The 24 year old male was arrested by Eugene Police Department was arrested for suspicion of the below crimes:

Unlawful possession of methamphetamine.
(1) It is unlawful for any person knowingly or intentionally to possess methamphetamine unless the substance was obtained directly from, or pursuant to, a valid prescription or order of a practitioner while acting in the course of professional practice, or except as otherwise authorized by ORS 475.005 to 475.285 and 475.752 to 475.980.(2) Unlawful possession of methamphetamine is a Class C felony. [2005 c.708 §18]
Giving false information to peace officer for a citation or arrest on a warrant.
(1) A person commits the crime of giving false information to a peace officer for issuance or service of a citation or for an arrest on a warrant if the person knowingly uses or gives a false or fictitious name, address or date of birth to any peace officer for the purpose of:(a) The officer’s issuing or serving the person a citation under authority of ORS 133.055 to 133.076 or ORS chapter 153; or
(b) The officer’s arresting the person on a warrant.
(2) A person who violates this section commits a Class A misdemeanor. [1983 c.661 §11; 1999 c.1051 §70; 2003 c.777 §1; 2007 c.771 §1]
Tampering with physical evidence.
(1) A person commits the crime of tampering with physical evidence if, with intent that it be used, introduced, rejected or unavailable in an official proceeding which is then pending or to the knowledge of such person is about to be instituted, the person:(a) Destroys, mutilates, alters, conceals or removes physical evidence impairing its verity or availability; or
(b) Knowingly makes, produces or offers any false physical evidence; or
(c) Prevents the production of physical evidence by an act of force, intimidation or deception against any person.
(2) Tampering with physical evidence is a Class A misdemeanor. [1971 c.743 §204]
Resisting arrest.
(1) A person commits the crime of resisting arrest if the person intentionally resists a person known by the person to be a peace officer or parole and probation officer in making an arrest.(2) As used in this section:
(a) Arrest has the meaning given that term in ORS 133.005 and includes, but is not limited to, the booking process.
(b) Parole and probation officer has the meaning given that term in ORS 181A.355.
(c) Resists means the use or threatened use of violence, physical force or any other means that creates a substantial risk of physical injury to any person and includes, but is not limited to, behavior clearly intended to prevent being taken into custody by overcoming the actions of the arresting officer. The behavior does not have to result in actual physical injury to an officer. Passive resistance does not constitute behavior intended to prevent being taken into custody.
(3) It is no defense to a prosecution under this section that the peace officer or parole and probation officer lacked legal authority to make the arrest or book the person, provided the officer was acting under color of official authority.
(4) Resisting arrest is a Class A misdemeanor. [1971 c.743 §206; 1989 c.877 §1; 1997 c.749 §3; 2005 c.668 §2]
Burglary in the first degree.
(1) A person commits the crime of burglary in the first degree if the person violates ORS 164.215 and the building is a dwelling, or if in effecting entry or while in a building or in immediate flight therefrom the person:(a) Is armed with a burglary tool or theft device as defined in ORS 164.235 or a deadly weapon;
(b) Causes or attempts to cause physical injury to any person; or
(c) Uses or threatens to use a dangerous weapon.
(2) Burglary in the first degree is a Class A felony. [1971 c.743 §137; 2003 c.577 §10]