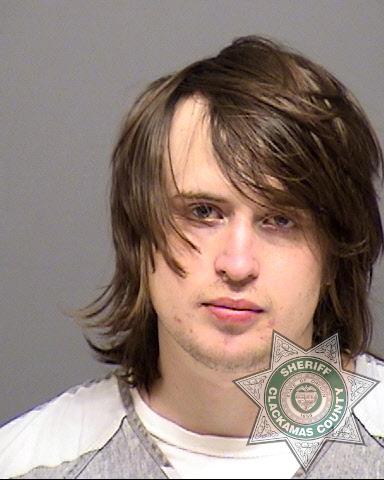 The male arrested was listed as having a date of birth of 7/26/93 and was arrested for suspicion of the below crimes:

Bail has been set to 0 for Powers which is listed as a 5.0 ft 8 in white male weighing approximately 150 lbs.

Strangulation.
(1) A person commits the crime of strangulation if the person knowingly impedes the normal breathing or circulation of the blood of another person by:(a) Applying pressure on the throat or neck of the other person; or
(b) Blocking the nose or mouth of the other person.
(2) Subsection (1) of this section does not apply to legitimate medical or dental procedures or good faith practices of a religious belief.
(3) Strangulation is a Class A misdemeanor.
(4) Notwithstanding subsection (3) of this section, strangulation is a Class C felony if:
(a) The crime is committed in the immediate presence of, or is witnessed by, the person’s or the victim’s minor child or stepchild or a minor child residing within the household of the person or the victim;
(b) The victim is under 10 years of age;
(c) During the commission of the crime, the person used, attempted to use or threatened to use a dangerous or deadly weapon, as those terms are defined in ORS 161.015, unlawfully against another;
(d) The person has been previously convicted of violating this section or ORS 163.160, 163.165, 163.175, 163.185 or 163.190, or of committing an equivalent crime in another jurisdiction, and the victim in the previous conviction is the same person who is the victim of the current crime;
(e) The person has at least three previous convictions for violating this section or ORS 163.160, 163.165, 163.175, 163.185 or 163.190 or for committing an equivalent crime in another jurisdiction, in any combination; or
(f) The person commits the strangulation knowing that the victim is pregnant.
(5) For purposes of subsection (4)(a) of this section, a strangulation is witnessed if the strangulation is seen or directly perceived in any other manner by the child. [2003 c.577 §2, 2011 c.666 §1; 2012 c.82 §1; 2015 c.639 §1]
Fleeing or attempting to elude police officer; penalty.
(1) A person commits the crime of fleeing or attempting to elude a police officer if:(a) The person is operating a motor vehicle; and
(b) A police officer who is in uniform and prominently displaying the police officer’s badge of office or operating a vehicle appropriately marked showing it to be an official police vehicle gives a visual or audible signal to bring the vehicle to a stop, including any signal by hand, voice, emergency light or siren, and either:
(A) The person, while still in the vehicle, knowingly flees or attempts to elude a pursuing police officer; or
(B) The person gets out of the vehicle and knowingly flees or attempts to elude the police officer.
(2) It is an affirmative defense to a prosecution of a person under this section that, after a police officer operating a vehicle not marked as an official police vehicle signaled the person to bring the person’s vehicle to a stop, the person proceeded lawfully to an area the person reasonably believed was necessary to reach before stopping.
(3) The offense described in this section, fleeing or attempting to elude a police officer, is applicable upon any premises open to the public and:
(a) Is a Class C felony if committed as described in subsection (1)(b)(A) of this section; or
(b) Is a Class A misdemeanor if committed as described in subsection (1)(b)(B) of this section. [1983 c.338 §664; 1991 c.655 §1; 1997 c.532 §1; 1997 c.860 §1]