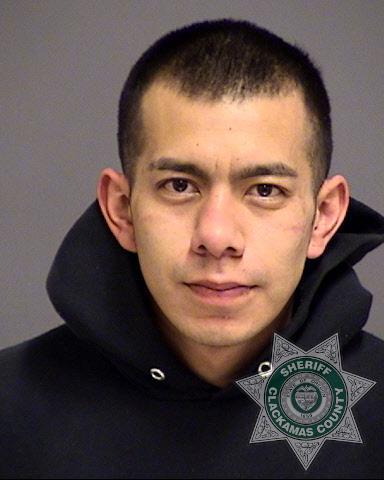 The male arrested was listed as having a date of birth of 11/24/93 and was arrested for suspicion of the below crimes:

Bail has been set to 14000 for Gonzalez which is listed as a 5.0 ft 8 in hispanic male weighing approximately 180 lbs.

Theft in the third degree.
(1) A person commits the crime of theft in the third degree if:(a) By means other than extortion, the person commits theft as defined in ORS 164.015; and
(b) The total value of the property in a single or an aggregate transaction is less than $100.
(2) Theft in the third degree is a Class C misdemeanor. [1987 c.907 §2; 2009 c.11 §11; 2009 c.16 §1]
Fleeing or attempting to elude police officer; penalty.
(1) A person commits the crime of fleeing or attempting to elude a police officer if:(a) The person is operating a motor vehicle; and
(b) A police officer who is in uniform and prominently displaying the police officer’s badge of office or operating a vehicle appropriately marked showing it to be an official police vehicle gives a visual or audible signal to bring the vehicle to a stop, including any signal by hand, voice, emergency light or siren, and either:
(A) The person, while still in the vehicle, knowingly flees or attempts to elude a pursuing police officer; or
(B) The person gets out of the vehicle and knowingly flees or attempts to elude the police officer.
(2) It is an affirmative defense to a prosecution of a person under this section that, after a police officer operating a vehicle not marked as an official police vehicle signaled the person to bring the person’s vehicle to a stop, the person proceeded lawfully to an area the person reasonably believed was necessary to reach before stopping.
(3) The offense described in this section, fleeing or attempting to elude a police officer, is applicable upon any premises open to the public and:
(a) Is a Class C felony if committed as described in subsection (1)(b)(A) of this section; or
(b) Is a Class A misdemeanor if committed as described in subsection (1)(b)(B) of this section. [1983 c.338 §664; 1991 c.655 §1; 1997 c.532 §1; 1997 c.860 §1]

(Generally)
Robbery in the third degree.
(1) A person commits the crime of robbery in the third degree if in the course of committing or attempting to commit theft or unauthorized use of a vehicle as defined in ORS 164.135 the person uses or threatens the immediate use of physical force upon another person with the intent of:(a) Preventing or overcoming resistance to the taking of the property or to retention thereof immediately after the taking; or
(b) Compelling the owner of such property or another person to deliver the property or to engage in other conduct which might aid in the commission of the theft or unauthorized use of a vehicle.
(2) Robbery in the third degree is a Class C felony. [1971 c.743 §148; 2003 c.357 §1]