Michael Ray Ochs was arrested on Wednesday, May 19th 2021 and booked into Clackamas County Jail in Clackamas, Oregon. 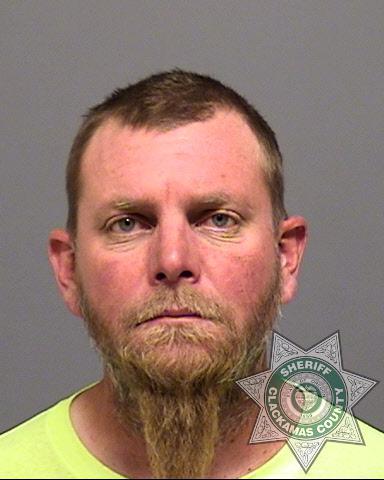 The male arrested was listed as having a date of birth of 6/18/82 and was arrested for suspicion of the below crimes:

Pointing firearm at another; courts having jurisdiction over offense.
Any person over the age of 12 years who, with or without malice, purposely points or aims any loaded or empty pistol, gun, revolver or other firearm, at or toward any other person within range of the firearm, except in self-defense, shall be fined upon conviction in any sum not less than $10 nor more than $500, or be imprisoned in the county jail not less than 10 days nor more than six months, or both. Justice courts have jurisdiction concurrent with the circuit court of the trial of violations of this section. When any person is charged before a justice court with violation of this section, the court shall, upon motion of the district attorney, at any time before trial, act as a committing magistrate, and if probable cause be established, hold such person to the grand jury. [Formerly 163.320]
Unlawful use of weapon.
(1) A person commits the crime of unlawful use of a weapon if the person:(a) Attempts to use unlawfully against another, or carries or possesses with intent to use unlawfully against another, any dangerous or deadly weapon as defined in ORS 161.015; or
(b) Intentionally discharges a firearm, blowgun, bow and arrow, crossbow or explosive device within the city limits of any city or within residential areas within urban growth boundaries at or in the direction of any person, building, structure or vehicle within the range of the weapon without having legal authority for such discharge.
(2) This section does not apply to:
(a) Police officers or military personnel in the lawful performance of their official duties;
(b) Persons lawfully defending life or property as provided in ORS 161.219;
(c) Persons discharging firearms, blowguns, bows and arrows, crossbows or explosive devices upon public or private shooting ranges, shooting galleries or other areas designated and built for the purpose of target shooting;
(d) Persons lawfully engaged in hunting in compliance with rules and regulations adopted by the State Department of Fish and Wildlife; or
(e) An employee of the United States Department of Agriculture, acting within the scope of employment, discharging a firearm in the course of the lawful taking of wildlife.
(3) Unlawful use of a weapon is a Class C felony. [Amended by 1975 c.700 §1; 1985 c.543 §1; 1991 c.797 §1; 2009 c.556 §5]
Harassment.
(1) A person commits the crime of harassment if the person intentionally:(a) Harasses or annoys another person by:
(A) Subjecting such other person to offensive physical contact;
(B) Publicly insulting such other person by abusive words or gestures in a manner intended and likely to provoke a violent response; or
(C) Distributing a visual recording, as defined in ORS 163.665, of the other person engaged in sexually explicit conduct, as defined in ORS 163.665, or in a state of nudity, as defined in ORS 163.700, when the other person is under 18 years of age at the time of the recording;
(b) Subjects another to alarm by conveying a false report, known by the conveyor to be false, concerning death or serious physical injury to a person, which report reasonably would be expected to cause alarm; or
(c) Subjects another to alarm by conveying a telephonic, electronic or written threat to inflict serious physical injury on that person or to commit a felony involving the person or property of that person or any member of that person’s family, which threat reasonably would be expected to cause alarm.
(2)(a) A person is criminally liable for harassment if the person knowingly permits any telephone or electronic device under the person’s control to be used in violation of subsection (1) of this section.
(b) Harassment that is committed under the circumstances described in subsection (1)(c) of this section is committed in either the county in which the communication originated or the county in which the communication was received.
(3) Harassment is a Class B misdemeanor.
(4) Notwithstanding subsection (3) of this section, harassment is a Class A misdemeanor if a person violates:
(a) Subsection (1)(a)(A) of this section by subjecting another person to offensive physical contact and the offensive physical contact consists of touching the sexual or other intimate parts of the other person;
(b) Subsection (1)(a)(C) of this section; or
(c) Subsection (1)(c) of this section and:
(A) The person has a previous conviction under subsection (1)(c) of this section and the victim of the current offense was the victim or a member of the family of the victim of the previous offense;
(B) At the time the offense was committed, the victim was protected by a stalking protective order, a restraining order as defined in ORS 24.190 or any other court order prohibiting the person from contacting the victim;
(C) At the time the offense was committed, the person reasonably believed the victim to be under 18 years of age and more than three years younger than the person; or
(D)(i) The person conveyed a threat to kill the other person or any member of the family of the other person;
(ii) The person expressed the intent to carry out the threat; and
(iii) A reasonable person would believe that the threat was likely to be followed by action.
(5) It is not a defense to a charge under subsection (1)(a)(C) of this section that the defendant did not know the age of the victim.
(6) As used in this section, electronic threat means a threat conveyed by electronic mail, the Internet, a telephone text message or any other transmission of information by wire, radio, optical cable, cellular system, electromagnetic system or other similar means. [1971 c.743 §223; 1981 c.468 §1; 1985 c.498 §1; 1987 c.806 §3; 1995 c.802 §1; 2001 c.870 §2; 2009 c.783 §1; 2013 c.649 §26]
Menacing.
(1) A person commits the crime of menacing if by word or conduct the person intentionally attempts to place another person in fear of imminent serious physical injury.(2) Menacing is a Class A misdemeanor. [1971 c.743 §95]