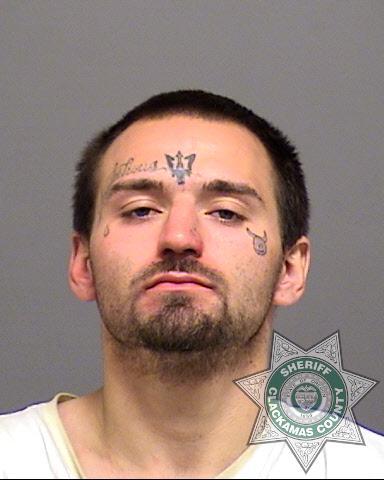 The male arrested was listed as having a date of birth of 1/4/79 and was arrested for suspicion of the below crimes:

Burglary in the first degree.
(1) A person commits the crime of burglary in the first degree if the person violates ORS 164.215 and the building is a dwelling, or if in effecting entry or while in a building or in immediate flight therefrom the person:(a) Is armed with a burglary tool or theft device as defined in ORS 164.235 or a deadly weapon;
(b) Causes or attempts to cause physical injury to any person; or
(c) Uses or threatens to use a dangerous weapon.
(2) Burglary in the first degree is a Class A felony. [1971 c.743 §137; 2003 c.577 §10]
Theft in the second degree.
(1) A person commits the crime of theft in the second degree if:(a) By means other than extortion, the person commits theft as defined in ORS 164.015; and
(b) The total value of the property in a single or aggregate transaction is $100 or more and less than $1,000.
(2) Theft in the second degree is a Class A misdemeanor. [1971 c.743 §124; 1987 c.907 §3; 1993 c.680 §19; 2009 c.11 §12; 2009 c.16 §2]
Fleeing or attempting to elude police officer; penalty.
(1) A person commits the crime of fleeing or attempting to elude a police officer if:(a) The person is operating a motor vehicle; and
(b) A police officer who is in uniform and prominently displaying the police officer’s badge of office or operating a vehicle appropriately marked showing it to be an official police vehicle gives a visual or audible signal to bring the vehicle to a stop, including any signal by hand, voice, emergency light or siren, and either:
(A) The person, while still in the vehicle, knowingly flees or attempts to elude a pursuing police officer; or
(B) The person gets out of the vehicle and knowingly flees or attempts to elude the police officer.
(2) It is an affirmative defense to a prosecution of a person under this section that, after a police officer operating a vehicle not marked as an official police vehicle signaled the person to bring the person’s vehicle to a stop, the person proceeded lawfully to an area the person reasonably believed was necessary to reach before stopping.
(3) The offense described in this section, fleeing or attempting to elude a police officer, is applicable upon any premises open to the public and:
(a) Is a Class C felony if committed as described in subsection (1)(b)(A) of this section; or
(b) Is a Class A misdemeanor if committed as described in subsection (1)(b)(B) of this section. [1983 c.338 §664; 1991 c.655 §1; 1997 c.532 §1; 1997 c.860 §1]